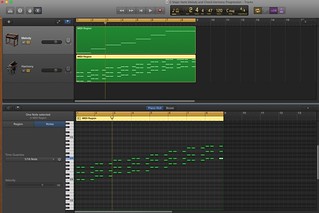 What I did to modify the melody was that I added two other chords to each of the harmony part. I copied and pasted the notes by using command-c. I saved the garage band file as a MP3(MIDI) and uploaded it to Soundcloud. Then I screenshot the notes and uploaded that in Flickr.

One of My Favorite Harmonies

I like this harmony because it is very low and mysterious. This song with the harmony is my favorite one of all time from The Hobbit. This song has a lot of the same harmonic lines.  Some harmonic notes were G minor, D minor, Bb, F major, D, E, A minor. the revealing part was in all of the minor chords there is one major chord. The tonic note was the Gm/D in the beginning, the supertonic note was the C and the dominant was Dm/F and F major 6. 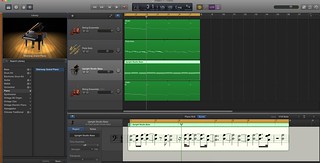 For my harmony I reused my rhythm and melody project and built a harmony to it. The chord structure is a beginning C5 and an ending with a D5. The tonic chord is C5 which appears throughout the song. With the tension chord following it D5. There are about 1 and a half chords in each measure following the movement between steps in the rhythm and melody. There is a little dissonance within the song because the harmony doesn’t necessarily follow the notes of the rhythm and melody.

Harmony itself is two or more sounds put together that sounds good.

Drone is a singular continuos note. A evolution of drone is having instead if a singular note going on we have a drone that is shadowing the melody but just one note lower, there another variation is having two notes going back and forth continuously in the background of the song.

Harmonics are the hidden notes in music that you wouldn’t normally be able to notice. Every single note has a variety of harmonic notes hidden in them.

You can build a triad with any note with a set of three notes. There are minor and major triads the minor make them somber.

Consists of two or more simultaneous lines of independent melody, as opposed to a musical texture with just one voice, monophony, or a texture with one dominant melodic voice accompanied by chords, which is called homophony Progression

Is a ground bass or chord progression that was popular during the Italian Renaissance and known throughout Europe in the 16th century. The progression is a variant of the double tonic:
Passimezzo Moderno-

Lack of harmony between notes sounding together. Notes that clash together from different chords.

Lack of harmony among musical notes. A tension or clash resulting from the combination of two disharmonious or unsuitable elements.

Jail out of free card for using dissonance. A note not belonging to the harmony but interposed to secure a smooth transition from one chord to another. Passing through to other notes. when it passes it causes dissonance.

suspended chord (sus chord) is a musical chord in which the (major or minor) third is omitted, replaced usually with either a perfect fourth or a major second. They missed their passing time so they are sitting in the waiting line. Notes left hanging.

Consisting of a triad plus a note forming an interval of a seventh above the chord’s root. When not otherwise specified, a “seventh chord” usually means a dominant seventh chord: a major triad together with a minor seventh.

is a triad, or chord, consisting of two major thirds (an augmented fifth). The term augmented triad arises from an augmented triad being considered a major chord whose top note (fifth) is raised, or augmented. It can be represented by the integer notation {0, 4, 8}. Unpredictable

What I Learned and Problems I Solved

The first time seeing this project it was a little difficult understanding what we were supposed to do. The movie was going too fast so I couldn’t get all the Harmony terms down. However I asked my neighbors and looked up the definitions when I was having problems. When i was trying to find my favorite harmony songs I had to ask a neighbor to find where i could get a MIDI file from to download it to Garage band. Throughout this project i learned what makes up a harmony, how to ask for help or figure it out on my own and figuring out more areas of Garageband.